‘The L Word: Generation Q’ showrunner Marja-Lewis Ryan on voice and making room for everyone to be heard

“It’s so fun to have this job because I just love the puzzle. I started as an actor on stage; I went to NYU in the Tisch Acting Program, and I studied at the Atlantic Theatre Company, so I read a lot of David Mamet [but] found I just didn’t see myself on stage. So, I started writing my own stuff.”

“I just wasn’t hearing my own gay voice. I couldn’t find stuff that I could act well, because it always felt like I had to do two things: I had to first act like a straight person, and then also perform the scene. I’m just not a passing straight person, so that was very hard… Writing allowed me to at least stand in my own perspective. I felt like I wasn’t going to be able to work because I was like, ‘who’s going to cast me?’. I started writing when I was 18/19, and I came out here and wrote plays for the Black Box theatre down on Santa Monica Boulevard. That’s how I came up.”

Ryan’s enthusiasm for her craft is palpable and shines through every thoughtful statement. It’s easy to understand what Ilene Chaiken, creator behind the original The L Word of the early 2000s, saw in Ryan when they worked together.

“I was very early in my career and hadn’t had a studio job yet, really; still working very much in the independent space, and I got my first job on the studio side doing a film adaptation of the self-help book, “Lean In”. And Ilene Chaiken was in that room with me. When she walked in, I knew exactly who she was. I was a really big fan, [the original The L Word] was a huge part of my own coming out process. So, you know, I geeked out! We did get to work together for a week. Then, like six months later, I saw her name in the credits of The Handmaid’s Tale and I sent her an email. It just said, ‘I love The Handmaid’s Tale and congratulations. I was really hoping she was gonna be like, do you want to shadow me, because I was thinking at the time do I want to be a television director?” 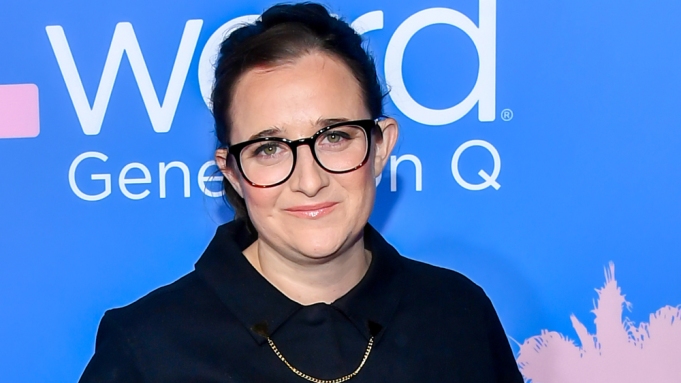 Instead, Chaiken responded by asking Ryan to come pitch on The L Word. “There were like three or four of us that pitched, and I go the job about five years ago. 2017. Crazy. My whole life has just completely changed in those years—my wife gave birth during pilot prep for the show. Season one was really just about survival for me. I was like, I promised them an episode of television. I’m going to give them eight episodes of television and it might kill me, but like, every year I just feel like I’ve gotten a little bit better which allows me to stand a little bit further away and be able to see the whole puzzle. It’s just the number of hours that I’ve accumulated.”

That goes hand-in-hand with some of Ryan’s best career advice.

“Getting that perspective is how you get better, because it allows you to get faster, which allows you to think about more stuff that you've never gotten to think about before. That's basically how I look at it. It's like I'm just freeing up places in my brain to go wander because I've mastered something [else]. Like on this show, I know exactly how it functions, I know exactly what needs to happen at the bottom of the first act. I know exactly the kind of event that works on the show and every episode needs an event. So, I know how to structurally organize the writers’ room. How to break an episode to me has really emerged. I think the thing that still eludes me is how to break a whole season. I don't think I'm good enough yet.”

But one of Ryan’s talents is distinct voice; that crucial ingredient for all screenwriters wanting to take the leap from hobby to professional.

“I think that like the search for voice is ongoing. I mean, I just wish I'd known that like, I was exactly… Where you are is exactly what your voice is meant to sound like. When I was 24 years old, I wrote a movie about my myself in college, and I played myself. That really helped me a lot; if you can't literally say your own words, like if they don't sound right coming out of your mouth, then that's not what your voice sounds like. It's very literal. It's like, what do you sound like in a conversation? Your voice is the one you're already speaking with. It's just a matter of whether or not you can stand in it confidently enough and replicate it.

“It's so hard and we all struggle with it all the time,” Ryan admits. “I write a lot about the queer experience. I think the queer experience of standing in your own shoes is doubly hard because of the shame that our community sort of endures over time, it erodes your sense of self. So, you're receiving negative input while you're trying to figure out who you are. And it gets harder and harder to write what you really sound like. You start writing like a straight white man's idea of self and that's how we get like, over sexualized a lot, or we're like, you know, the stoner best friend—we get tokenized in that way, and we start to tokenize ourselves and our own voices too, so there's so much to overcome. But I think surrounding yourself with other writers who share your worldview and like who really want to get better. You know, that's been something really fun for me as a television writer.”

Ryan compares putting a balanced writers’ room together—both on the show and for her other projects, and there are many!—to a basketball team, every person bringing different skills ranging from the “ideas woman” to the structure person to the comedy pitcher.

“Balance, that's like my big secret to having this job. No one does it alone. Everybody has friends. Everyone's reading each other's shit. That’s how you get good!”

Her commitment to supporting and lifting unheard voices is also a major part of the job.

“Part of what has been the greatest joy of this job is that I don't just run a show. I like also run what we always call the LGBT Center. There’re so many queers involved in the show in every aspect, and I'm so proud of that. And this season I had this brand-new director out of Yale's MFA program… you could just feel it, like even on a Zoom call, I was like, oh shit, like that's a special person. They ended up directing four episodes for us this season and I just think they're incredibly special.”

“One of the greatest things I've gotten to watch in having this job is watching the way the actors change when they see themselves reflected in the director. You know, it's really such a privilege to be able to bring together our community like that and I hope I get to do it again.”