How do you go about writing a screenplay? There are a few of us who sit down at the computer, like some modern day Dalton Trumbo at his trusty Remington, type FADE IN: and keep going until the cigarette packet is empty.

Celtx, Movie Magic and Final Draft are great productivity tools. These take the hassle out of capitalising, indenting and laying out a script in the format demanded by the Hollywood movie moguls.

They also remember the names of your characters and scene locations. They’ll check your spelling, allow you to classify and rearrange scenes, and produce shooting scripts and script reports for your production team.

Final Draft™ has fought its way to the top in the screenplay formatting wars. If you believe the hype, it is “used by 95% of film and television productions.”

But for most of us, writing a screenplay begins long before we sit down at the keyboard with that real or virtual clean sheet in front of us. If you follow The Story Department’s advice, and have visited Logline It, you know the drill. You will have refined your logline, described the inciting incident, and developed a 3-act structure. You will have laid out the main beats and arcs and possibly covered your wall with scrawled library cards before you type EXT.

There are a few computer applications that can help you with this early stage. Pre-scripting is by definition a messy job with lots of redundancy.

Final Draft 10 aims to pull the whole process together into a single software package. (Declaration of interest: I’ve been a voluntary beta tester on Final Draft 10 for the past 18 months, but I have no financial interest in the software.)

In this review I’ll assume that the script formatting aspect of Final Draft needs no explanation or comment. I’ll confine myself to the meta-script aspects and the new and improved pre-scripting tools. 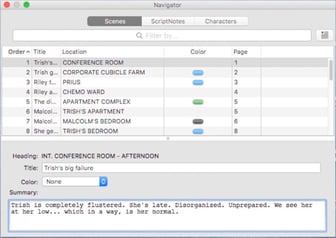 Final Draft 10 -This tabbed panel is not new — it’s been part of Final Draft for the past 3-4 versions at least, but its utility has been improved.

If you’re already using Final Draft you’ll be familiar with how use it to jump to, drag, rearrange and colour-code scenes. You know how to keep track of characters and define their arcs; and add script notes.

Now the Navigator is linked to The Story Map, which multiplies its usefulness.

Final Draft 10 - While the Navigator provides a running overview of your screenplay as you are writing it, the Story Map is an omnipresent, interactive view of your story.

It is a horizontal bar at the top of the window, providing an overview of your script at a glance.

Before you begin, you set a target length in pages, define Structure Points (eg. acts, mid-point) and add Beats. These become page targets in the Story Map. You can, of course, drag these targets around, add new points or erase them at will.

As you write new scenes, they appear in the Story Map along with any colours you added in the Navigator. Double clicking on a scene in the Map takes you to that scene in the script. You can zoom in to examine your scene sequence, or zoom out for a birds-eye view of your screenplay. 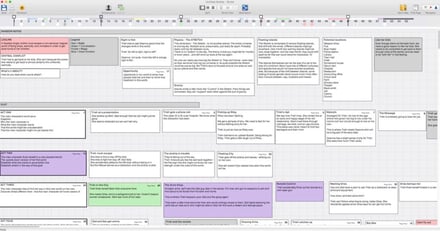 Final Draft 10 - The Beat Board is the most obvious new feature in Final Draft 10. It’s your pin board, where you scribble on virtual library cards and drag them around until they make sense.

The Board is totally free format, equally useful for brainstorming, structuring and making notes. Double click anywhere on the board to create a card, then change its size and colour and location and drag it into position.

What you put on these virtual cards is up to you: ideas, notes, character sketches, scene descriptions, “beats,” reminders, phone numbers, shopping lists…

I’ve never been an enthusiastic user of library cards and preferred Scrivener to structure my story. However, I’ve become a fan of the Beat Board for this visual process of brainstorming, rearranging, refining and editing.

It is instinctive and almost infinitely flexible. I’d appreciate more colours and a “snap to grid” option, though. Maybe that is my OCD speaking. And I’d like to be able to add hyperlinks and images, but maybe these will come in later versions.

(NB. The Beat Board is not related to the Index Cards view, which has been an option under the VIEW menu since Version 1.)

In Final Draft 9, you had the ability to split the screen vertically or horizontally, but now you can drag your Beats directly into your screenplay from the Split view. 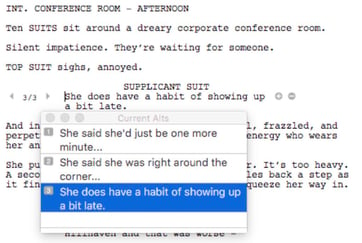 Final Draft 10 - Now here’s a handy feature: say you can’t decide whether a character is a Yank or an Aussie; whether he says “Wassup dude?” or “G’day mate?”

This handy refinement enables you to include any number of alternatives.

Just click on the small “+” beside the line and type in the Yank/Aussie lines.

Both alternatives remain in the screenplay until you decide which market you are selling to.

Final Draft 10 - I’ve been collaborating on a script with a writer in the USA. We used to email copies back and forth and mark our contributions and changes using Script Notes and colours.

With FD10 and Skype it’s as though we are sitting side-by-side. It’s as simple as clicking “Collaborate”, obtaining a Session ID Number and Skyping (or emailing) the number to him. He clicks Collaborate and enters the ID Number and my script appears on his computer.

We pass Control back and forward and any changes one of us makes, the other sees in real time. You can communicate interactively using text or speech, though we prefer to run a Skype session beside it. It’s as painless as your bandwidth allows.

Unfortunately, the Beat Board, Splits and several other new features are greyed out in Collaboration mode. I hope they are going to be included in versions 10+.

There are a lot of smaller improvements in Version 10, too. You’ll find more scene numbering options, header and footer improvements, revision versions. A long-overdue improvement is in the Dictionaries: Australian English works at last and I’ve tried it with French and German. And here’s a neat trick: when I’m collaborating with my American colleague, his spell-checker reads US English and mine is Australian English.

If you’re a serious scriptwriter, Final Draft 8 or 9 were always worth the investment. MacOS and Windows Final Draft documents are interchangeable and it delivers a script that won’t be rejected on formatting grounds by those picky Hollywood producers’ assistants. There are now Final Draft apps for iPhone and iPad, for both reading (free) and writing (US$10). So you can take it anywhere.

Let’s face it, Final Draft 10 is an investment, whether you are buying it or upgrading. If you’re not being paid for scriptwriting, perhaps stick with Celtx (free) and library cards for a while. When you’re ready to step into the bear pit, download the Free Trial from finaldraft.com, and explore the introduction screens and videos.

If you think it’s for you, check this site for the best price!

Final Draft 10 is a new ball game, with useful, powerful and stable pre-scripting tools and the best collaboration feature on the market.

There are a few options that I hope appear in 10.1: more colours and a snap-to-grid in the Beat Board. Equally useful would be hyperlinks, and the ability to past graphics. Extending the collaboration capability to the Beat Board will double its usefulness.