Rising Through the Ranks: Laura Mannino is pitch perfect 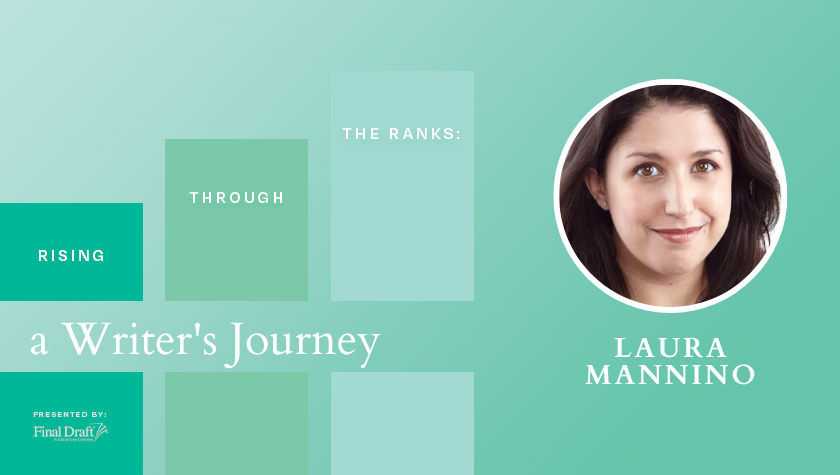 ATX TV Festival’s season 11 pitch competition runner-up Laura Mannino is still riding high after her experience pitching her comedy Bodice Rippers to a panel of studio and network execs during the live competition.

“I recommend everyone goes to ATX,” says Mannino, who relays that everyone at ATX has been wonderful about following through with her post-competition. “ATX is a supportive and inclusive environment not only for fans, but for both emerging and established TV creators. I grew so much while preparing for ATX. I recommend all emerging writers to submit to its pitch competition!”

Mannino is also an AFF 2nd Rounder this year, as well as the 2022 Stowe Story Labs Lawfirm of Stacey A. Davis Fellowship Winner for women over 40; an experience she participated in this August during the Sidewalk Film Festival in Birmingham, AB. What both application processes have taught Mannino, whose roots are in acting at NYU and the UCB, is the importance of a clear, memorable pitch—as well as having subject matter that comes from an authentic place.

The art of pitching

“What I loved about stand up was that you could directly communicate with the audience. You don't have to wait to get selected. You don't have to audition. You just had absolute total control. And I think the same reason why I was attracted to stand up was the foundation of why I was probably always a writer. I just loved that I could discover my own voice and connect directly to an audience and not be only a pawn in someone else's vision,” she explains.

“I did stand up at dive bars and actual dungeons and former strip clubs and yoga studios [in New York]. It was a lot of fun, and I think that was where I learned a lot of life skills. I learned that that you don't know until you do it. That part of creating is failing in front of people and that your audience knows when they're being lied to. You know, I think that the collective consciousness of an audience is an extremely intelligent source of energy.”

A truth that holds when pitching in front of a live panel to an audience of one in a general meeting. And Mannino has style in spades when it comes to her pitching, which comes through in her writing just as clearly.

Finding your voice with an undeniable script sample

“I think I will always tell stories about women. That is where I feel like my place in this businesses is; to elevate the stories of women. I love exploring power dynamics and what it means to find your power. I don't think you have to live your power out in the world; it’s about finding the power in your own house, finding the power in your own life. I feel like a lot of t-shirt feminism likes to throw around the word ‘empowered’ and I don't love that word because I think all it does is makes people feel good. It means, like, you should have the confidence to be empowered, but not actually be in power,” she laughs. “I just really love exploring women and their relationships with power.”

Which is the partial inspiration behind Bodice Rippers. “It’s the first spec that I really believe could be a show. I really started from the get-go thinking about it as a show and not just a pilot script,” she admits.

“With Bodice Rippers I wanted to explore women finding their personal power and finding the confidence to run away from obligations and towards desire… I really want to feel like the audience is escaping into something. It does touch on serious themes and on grounded themes and relationships and issues—but I also do feel like we need joy and escapism more than ever. And maybe you can do that in a way that doesn't insult the intelligence of your audience. I think each time you write, paying attention to what sticks in your mind, what you find yourself thinking about and what you want to keep exploring and the questions you want to keep asking, I think that's your brand. That's who you are as a writer, that's your point of view.”

That point of view is doing well for Mannino so far, bringing her to ATX, Stowe, AFF and hopefully beyond as Bodice Rippers continues to generate interest.

Supporting others rising through the ranks

Mannino is also as focused on helping lift those around her as she is on putting in the work on her next script. Mannino started Second Tuesdays, LA-based mixers for women and non-binary screenwriters every second Tuesday of the month, in tandem with a group that has since evolved into Coven Creatives as an online support system.

“Writing in a pandemic is really isolating. So instead of sending a bunch of emails to people, telling them what I've been doing, I was like, why don't I just offer something to them? So I emailed everyone that I wanted to “start a monthly mixer for women and non-binary scriptwriters that includes features, plays, shorts, digital comedy, whatever, to get together. I’ve felt that the pandemic was difficult for everybody. But I think for women in particular, women who are parents, you really did just put so much of yourself aside to just keep afloat. And I think we have power when we all come together. I wanted to create that space where we can all feel a little less alone, not only as women or parents, but also as writers just continuing to show up to this industry that keeps giving us new reasons for why it's hard to break in.”

“Don’t write what you don’t love. Especially if it’s for free. Also, nothing is real and no one knows what they’re talking about,” she laughs. “I mean, all the stories been done, so what is your personal take?”

That, and “Resist and reject the idea that you are too old. That is capitalism and the patriarchy. I am the writer I am now because I am 43. I kept showing up to life.” Mannino goes on to paraphrase the inspiration she found in Fran Lebowitz’s interview of Toni Morrison: “Fran asked her, ‘Do you write every day?’ And Toni said ‘No, I think every day.’ So, I think it's really okay to have time to think and ponder and ask yourself questions before you start breaking a story. Just keep asking yourself a ton of questions that maybe you don't have answers for. I think that's where you're gonna find your point of view.”

Hopefully we’ll be catching Mannino’s point of view on a small screen near you, soon.