The Bricks of Breaking In: Julie Sagalowsky Diaz On Finding Your Voice

Julie Sagalowsky Diaz (Surfside Girls, The Shannara Chronicles) always found herself interested in performing as she did a lot of choir and musical theater in her youth. She recalls, “That was kind of my avenue into television, film and the arts at large.”

It was in college at Dartmouth where she started to find her direction as a writer. She reflects, “I majored in theater with an emphasis on acting, but as I started exploring more avenues around theater, I began directing plays and also taking writing classes. When I started taking some film classes, I realized like, oh, this is what I really want to do. I want to make films. I want to be a storyteller.”

Sagalowsky Diaz’s storytelling path took her to television as she explains, “What I love about writing for television is that you get to encompass everything from writing to being in the writers’ room, which is very collaborative, and then taking it through production which is sort of putting on a show, which goes full circle.”

Even though they had been writing very different types of projects, dark comedies versus sci-fi, Sagalowsky Diaz teamed up with her then husband to be, Alex, in grad school to write a television idea together. Little could they imagine at the time that this first collaboration, done as a lark, would lead to their first big success. She elaborates, “We took a sitcom writing class, which is bizarre because we really aren’t that funny, but still in student mode, we’re like, we’ll just try it.”

She adds, “We wrote a tween multi-cam sitcom, What’s Up Warthogs. Live action. It was a bit like 30 Rock meets Saved by the Bell. While we were in grad school, our manager at the time, who we’re still with today, he sold it to Disney Channel in Canada, Disney XD. Which was crazy. It was definitely a stroke of beginner's luck, where we just got thrown into the deep end.” 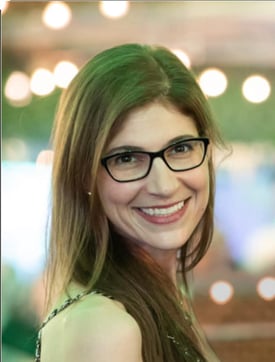 With that early success, Sagalowsky Diaz believed their careers were on the way, but this is when they faced a new and unexpected challenge. She further details, “It was eye-opening for us to come back from Canada and we sort of started over. We really were not getting traction at that time in the kid’s space in the US, which startled us.”

She also admits, “I think we were a little naive in that respect. We thought, oh, you just write a script and then you have a manager who sells it. Then we came back and realized that it’s really, really hard. So the phase a lot of people go through, we went through as well. It’s just we had this one thing under our belt, but in all honesty, nobody cared.”

The biggest challenge that Sagalowsky Diaz faced early in her career, is still the same challenge she still feels to this day, which is how to keep the momentum going. She observes that she is, “Always looking for the next opportunity and everything is inherently freelance and that never changes no matter how high up the ladder you go.”

It’s through this adversity that Sagalowsky Diaz discovered one of the biggest keys to the success and sustainability of her career, but it wasn’t a quick conclusion. It was something that came through continued writing and being willing to take time and look at where they’d been and where they saw themselves going. She states, “We realized if we’re not getting staffed in similar shows to what we sold, then maybe it’s time for a pivot. It was sort of a lark that we tried a multi-cam sitcom and in our hearts, we were like, I’m not sure that’s our strongest avenue as writers. So we took a step back and said, well then if we’re starting over, what do we really want to do? We decided that was really more dramas.”

In this switch of direction, Sagalowsky Diaz encountered pushback from reps and execs that she still often hears up-and-coming writers dealing with as well. She describes, “Early on, sometimes we’d get this feedback of like, you need to choose a lane. We were saying we like family shows. We like darker YA dramas. And we really love adult science fiction. We would get this feedback of like, I don’t know what to make of that. I don’t know how to further your career.”

When facing this sort of feedback, Sagalowsky Diaz recommends writing whatever you’re most excited about, because that is what will fuel your creativity. She offers, “That’s the passion that is the reason we all can’t quit this. So really following our hearts. Writing what we believe in, because that inevitably ends up being the strongest. It has led to surprising opportunities.”

Some of the best advice Sagalowsky Diaz has received through the years relates less to the craft of writing, but more about relationships. She notes, “I think myself, like many other writers, my comfort zone is home with my husband and my computer writing stories and it’s not really being a social butterfly.”

She expands, “Having that sense of community to swap stories of our own challenges and successes is essential. And then also for sharing tips about what’s happening in the industry is really great too. I think that’s the biggest advice, getting to know your peers. Those are the relationships that are real and then you all grow together.”

So, how does a writer get going in this industry? Sagalowsky Diaz advises, “I do think the first step is obviously to write something wonderful. And keep writing stuff that you truly believe in. Then try to get to know, whether it’s assistants or brand new managers, those are the people that are going to be most receptive right away. Really those people who are just starting out, because they have as much to prove as you do. They’re looking for somebody new that they can fight for.”

Should a writer be fortunate enough to get a meeting, Sagalowsky Diaz encourages writers to understand that if you got that meeting, whether a general or for staffing, the person meeting with you already knows your writing, let them get to know you, who you really are. She shares, “I think the biggest thing to realize is that you don’t need to come in and give a verbal presentation of your resume, which took me a long time to understand. I wanted to prove so badly that I was legitimate.”

She emphasizes, “That meeting is about getting to know you as a person and the best thing that you can do is perfect your own personal story. We’re storytellers and we want to get hired to write stories. So the first story that you’re going to be telling, is who you are. Find a tight pitch of yourself in a conversational way. It will make you memorable.”

Specifically when it comes to hiring writers a lot depends on the individual needs of a room. She reminds writers to be unafraid to share their personal story. She declares, “If you’re too timid and it feels like we have to sort of pull the answers out of you, that might suggest that although we love what you write on the page, you may not actually be contributing that much in the room and maybe that’s not going to be as useful for us.”

Finding your own voice is one thing that can really make a person stand out. It’s also something that might not be quickly seen as you write, but it comes evident the more you write. This is a big lesson that Sagalowsky Diaz wished she had learned earlier in her career. She relates, “I wish I understood better the importance of my individuality and leaning into that, as opposed to feeling like there’s an idealized version of what a professional writer is and I should try to become more like that, as opposed to saying, no, my own life story and my own perspective is the whole reason I’m doing this.”

She continues, “That’s what I should be leading with and not worry if maybe some of the other professional writers that I’ve heard of or know don’t look like me. Or don’t have the same background as me. I should embrace my authentic voice with a vengeance right away and be less worried about what this mystical professional writer being is and trying to emulate that.”

Identifying your voice can be empowering. Sagalowsky Diaz asserts, “When you find that, I feel like you get a certain confidence that can guide you through all sorts of projects and also help you figure out what should I be writing, what I shouldn’t, what jobs should I chase, which ones maybe I’m not the strongest person for.”

For those looking to build and grow a lasting writing career, Sagalowsky Diaz encourages, “My advice would be to not be afraid to share your material, to find or make your writers’ group so you have others to practice on. Sometimes it feels a little hokey or embarrassing to practice your pitch on somebody else, but It is so useful. You’re an asset as a listener to your fellow writer, so to really practice that stuff so you’re not going into it cold.”

Kelly Jo Brick is a TV drama and documentary writer. A Sundance Fellow and alum of Women In Film’s Writer/Showrunner Mentoring Circle, Kelly Jo is also the Vice Chair of the WGAW Genre Committee. She wrote the Telly Award-winning film PAUSE and the Frank Lloyd Wright documentary, The Jewel In The Woods. Follow her on Twitter @KellyJoBrick.