The 12th Annual Screenwriting Nominees Q&A with Jeff Goldsmith: First Pages, Doubt and the Power of “No”

The Academy gods shone in Hollywood on Monday night as hundreds of aspiring writers and filmmakers packed into the Los Angeles Film School in Hollywood for the 12th Annual Screenwriting Nominees Q&A.  A feast for screenwriters, the event was moderated by Jeff Goldsmith, host of The Q&A with Jeff Goldsmith podcast.

The standing room only event delivered a wealth of guidance for up-and-coming screenwriters, and it proved once again that even award winners, auteurs and superstars struggle with what goes on the page.

ON THE POWER OF THOSE OPENING PAGES

It’s almost a cliché at this point to say the opening pages of your script are your most important. But this year’s nominees had a different take on those fateful first sentences.

“There's a point before the plot kicks,” said Johnson. “I feel there's a grace period the audience gives you. That's something you can use when you need to. ''

“I agree. There is a grace period,” continued Gerwig, “I love when I'm sitting there reading or watching and it feels like we've cut into the middle of a life, not making any allowances for the audience.”

Still, those first few pages can be the most stressful for a writer, regardless of their success or lack thereof. “You have this amazing opportunity to do anything,” said Baumbach. “It is a great responsibility, but it is also an opportunity. I think it’s something that shouldn’t be taken lightly. It’s thrilling, but it’s also incredibly daunting.”

ON THE POWER OF SAYING NO

Illuminating collaboration and the conviction to stand up for your artistic vision was perhaps the most poignant part of the night, with every nominee describing their own unique point of view on the subject.

“I can tell you that at the end of the process, the only thing that matters is if what is on the screen works,” said Johnson. “You’re not going to get any points for making people happy. You can still be a collaborator, but at the end of the day, it’s going to be your name on that movie.”

Joker scribe Silver had a few words of caution, though. He pointed out that many of the nominees were writers and directors of their own scripts, and not subject to collaboration with a director. “As simply a screenwriter,” he explained, “you don’t always have the final say. As just a writer, it’s a different situation on what you can actually say.”

At the end of the day, moviemaking is a tough business—and sometimes the simplest approach, is the best approach.

If you think that having an Academy-nominated screenplay will lessen your fears, we’ve got some bad news for you.

“All writing is self-doubt,” said Gerwig. She went on to explain, “There’s days of excitement and days where you think you're the worst.”

“There's days you can't think how you’re going to do it. It's always a struggle, it’s always hard,” agreed Silver.

If the night’s Q&A revealed any one, underlying theme, it’s that it doesn’t matter how many times you write, the feelings of doubt and worry are evergreen.

“Every new script, you feel like an amateur all over again,” said Baumbach. “You look at the last script and you wonder, ‘how did that even happen?’ You just have to start all over again.”

Johnson chimed in with, "Getting started is always is the hardest—rolling that boulder up the never-ending hill—but keep doing your thing and it'll happen.”

You can listen to the full podcast here!

Jeff Goldsmith is the publisher of Backstory Magazine. You can read the 'Once Upon a Time in Hollywood... issue for free until February 4th, 2020! 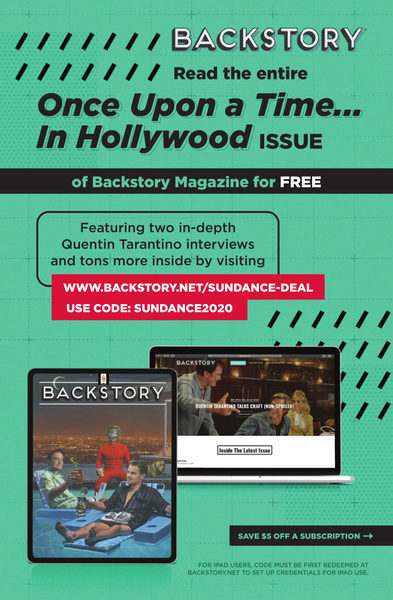 Dennis Fallon is an award-winning journalist and screenwriter. When not ghostwriting feature films in Los Angeles and Europe, he is a member of MENSA, an ordained minister and a rock musician who has composed music for over two hundred episodes of television.