Steven E. de Souza, who penned the film’s script more than 30 years ago, is adamant about that. But days ago at his Comedy Central Roast, the film’s star, Bruce Willis, told a wide-eyed audience “Die Hard is not a Christmas movie.”

In response to this controversial claim, de Souza has a plethora of evidence that proves the action star is, well, just plain wrong.

“It was a comedy roast. I think he said that to be funny and be trolling,” de Souza said.

“Does he sincerely believe that? I don’t know. But then again, who are we going to believe; the actor, the screenwriters, or 20th Century Fox?”

De Souza is referring to the faux children’s book A Die Hard Christmas, which 20th Century Fox released in 2017. It parodies the poem The Night Before Christmas.

“They show blood and guts and brains on the walls but it has Christmas-y illustrations and is called A Die Hard Christmas, so that’s from Rupert Murdoch. Are you going to argue with Rupert Murdoch?”

For additional proof, De Souza suggests looking at the film’s source; a book called Nothing Lasts Forever by Roderick Thorp. The novel takes place on December 24 — Christmas Eve — and is told through John McClane’s perspective.

“He’s thinking of all the Christmases he wasn’t with his family because of being a cop and before that, being in the army,” de Souza said.

For those still unconvinced, de Souza spent an afternoon crafting the ultimate evidence: A chart that proves Die Hard is more of a Christmas movie than one of the most beloved holiday films ever, White Christmas.

“I made a handy little chart,” he said.

“Any excuse not to write, right?” 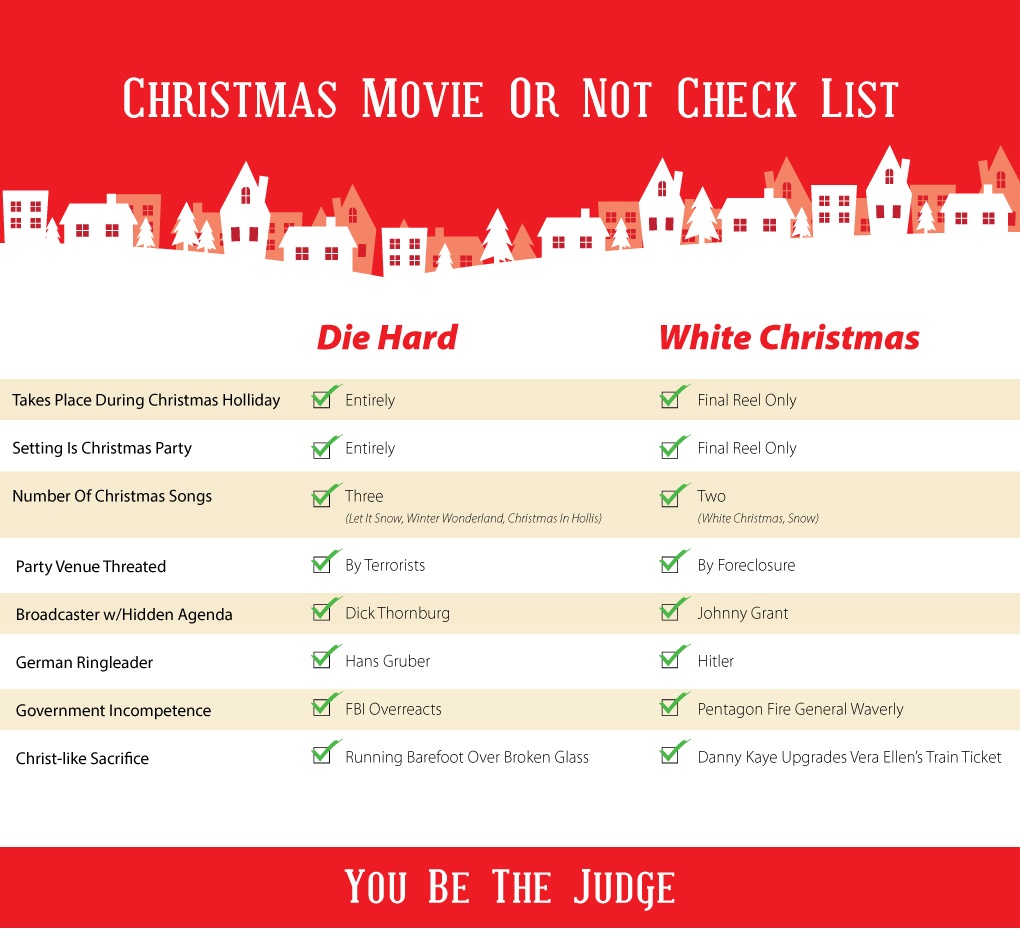 It’s hard to argue with de Souza’s logic. After all, he wrote the damn thing.

And not only did he pen the script, on several occasions he was called on set to improvise lines for Willis. Take, for example, the now iconic air vent scene, which shows Willis squeezing through ducts in the ceiling as he comically laments to himself about his impossible situation.

“I had just left the set. I get home and Joel Silver calls and says, ‘you gotta come back,’ but it was a quarter to two in the morning. He says, ‘these morons built the air vents with real air vent specs.’”

That meant it would take Willis twice as long to crawl through the ultra-tight space. They needed de Souza to write lines Willis could say to himself to hold the audiences’ attention while they watched this arduous task play out on screen.

“All those lines he says in the air vent are last minute additions, but when he says, ‘now I know what a TV dinner feels like,’ Bruce adlibbed that one.”

Another of Die Hard’s most memorable lines — “yippee ki yay, motherfucker” — was also crafted with Willis’ help. During the film’s production, De Souza visited the actor in his trailer on set, where the pair bonded over their similar upbringings.

“I go to meet him and I discover that we grew up 30 miles apart,” de Souza said.

“He’s five years younger than me, the age of my younger brother, and we’re talking about the same restaurants, ice cream shops …”

They got to talking about playing pretend cowboys growing up.

“We start talking about the TV shows we’d watch as kids, like Roy Rogers, and we both started saying, ‘yippie ki yay.’ It just came up in our conversation. So I said, ‘I’ll put that in the movie!’”

Die Hard is regarded as one of the best action movies of all time. From a screenwriting perspective, one of the most impressive aspects of the film is how de Souza managed to deliver exposition in clever, subtle ways.

The audience is never spoon-fed information. De Souza attributes this to a lesson he learned years ago: “The best way to get exposition out is through an argument.”

Instead of being told why John and Holly’s marriage is crumbling, for example, we see it play out through an argument between the characters, which feels true to life. To write this scene, de Souza had the actors improvise disagreements their characters might have.

“They improvised for an hour and a half, like, ‘you didn’t pick up the kids from school,’ and I took notes,” he said.

“The best pieces of what they improvised I laid back on top of the script. It really was one of the most collegial projects I’ve worked on, and that added to why it works so well.”

More than 30 years later, audiences are still enthralled with Die Hard; a film that, unlike many of its ilk, is just as watchable now as when it was first released. That, according to de Souza, is due in part to all of the film’s effects being practical.

“They really blew out the windows of that middle floor,” he said.

“When they shoot the bazooka at the tank, that’s all real. The only thing that isn’t 100 percent analog was when the helicopter crashes on the roof. That was a very big model of the building.”

If Die Hard was made today, only two changes would be required to update it for a 2018 audience: “They’d confiscate the hostages' phones,” de Souza said.

“And Bruce would have a cell phone instead of a walkie-talkie.”

It’s a film that redefined the action genre; one that skyrocketed Willis and Alan Rickman’s careers.

It’s a work that, three decades later, has fans up in arms over whether it’s a Christmas movie. Regardless of the answer, one thing is for certain: Die Hard is a beloved and worthy feature, all these years later.

De Souza said it best: “The only thing that dates the movie is Bonnie Bedelia’s hair and shoulder pads.”

Anna Klassen is a screenwriter and journalist living in Los Angeles. She can be found on twitter and Instagram at @annajklassen.