Creating a sitcom based on real-life situations is nothing new. Ray Ramono created Everybody Loves Raymond based on his standup which reflected his real family. Even back in the 1950s I Love Lucy had echoes of Lucy and Desi’s life.

What sets Lopez vs. Lopez apart is that the lead characters played by George Lopez and Mayan Lopez are real-life father and daughter playing those same roles in the show based on their own, and sometimes rough, relationship over the years.

When showrunner Debby Wolfe discovered Mayan and George’s TikTok videos about their relationship, she was instantly intrigued.

“It was this amazing video where she was airing out family dirty laundry while twerking upside down and I was like ‘this is incredible’,” Wolfe shares. “It’s George and his daughter healing their past trauma.” As a Latina, Wolfe said she could relate to the issues Mayan addressed and realized there was something there beyond TikTok.

She contacted her boss at the time Bruce Helford, one of the creators of The Connors, who set up a meeting with George and Mayan.

The decision to create a multi-cam sitcom, an increasingly rare format, was due to George Lopez and his ability shine in front of a live audience thanks to his career as a stand-up comedian and previous sitcom success.

“I grew up on multi-cams, most of the shows I’ve done in my career have been multi-cams and I love the format and I think it’s a special format,” Wolfe says. As a fan of Norman Lear, she strives to tell authentic stories while keeping it funny for all viewers. She accomplishes this by never compromising with jokes. “Every joke must be a hard joke and I push my room to do that. There’s nothing I hate more than a ‘kind of’ joke.”

“I asked what their daddy issues are because as comedy writers we all have them,” Wolfe says with a laugh regarding the question she asked of her writers on the first day they gathered in her writers room. She clarifies, “I like to create a writers room that feels very safe because we like to tackle hard stuff – I think the best stuff comes from your life and what your family or friends have experienced. I immediately open myself up and air all my stuff with my writers. I want them to feel they can share because that’s how we’ll get these real authentic stories.”

When it came to creating the pilot, she knew the core of the show centered around Mayan and George’s relationship and the emotions of what they’ve been through. But there had to be stories that fit into the sitcom format.

Wolfe wrote the pilot during the pandemic when she was living with her parents in Florida. One major point in the pilot was inspired by her parents constantly shutting the lights off on her.

“They kept yelling at me for leaving the lights on and they would shut them off when I was in the room,” she explains. “It kept happening over and over and I knew it had to be a part of the show. I brought it up with other people and they said it happened to them too.”

The father/daughter dynamic on-set is a constant source for new material too.

“They get triggered by one another,” Wolfe states. “As a writer I’m a creepy voyeur watching this go down and thinking it might inspire another episode. There was a moment where George told Mayan to be quiet and she said ‘Don’t tell me to be quiet!’

Wolfe immediately saw this and realized she could build a whole episode around when a child first tells their parents they can’t tell them to shut up.

She adds, “There are so many stories to mine from these two and they’re so open to me. It’s rare and special and I honor them for that.” It’s not just the Lopez’s life she plans on using and admits that she will incorporate a lot of stories from her life and the writers in the room. 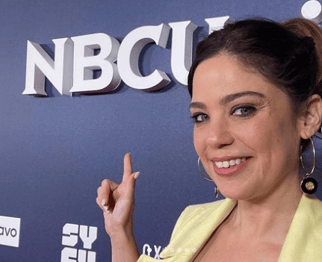 Advice for writing sitcoms and working in a writers room

“Write. The biggest thing writers don’t do is write,” Wolfe declares. And even then, the first script you write isn’t going to be good. Neither will your second. Wolfe continues, “You have to think of yourself as an athlete – they don’t just show up at the game, they practice. Writing is a craft and you can get better at it by practicing so just keep writing script after script.”

Writers are notorious procrastinators so Wolfe recommends entering screenplay competitions to give a deadline to push writers to complete their scripts.

When it comes to working in a writers room, experience matters. Not necessarily a long and illustrious career in writing but real-life experience.

Says Wolfe, “I want to know that the people in my room have gone through the experiences the characters have gone through. I like hearing the unique POV in their voice and when you see that you can tell who they are.” When she reviews a writer’s content, she prefers original materials over a spec script. She will also consider everything from short films to TikTok videos to stand up. “I look for anything that speaks to who you are as an artist.”

One thing she suggests writers avoid when in the room is to not be the person who points out problems without providing solutions.

“Don’t come in and say that doesn’t work. If you don’t have what else might work we’re going to keep right on going down that line because we have a deadline. Sometimes it’s better to stay quiet if you don’t have the solution,” Wolfe advises.

Wolfe grew up in Hollywood, Florida in a bi-cultural household — she has an El Savadorian mother and a Jewish father. Growing up in these two different worlds made her feel like a bit of an outsider.

“I always had an identity crisis,” she shares. ”To deal with that I turned to writing and creating. I went to film school and thought I was going to be this indie feminist filmmaker but my stuff was never quite edgy enough. It was always funny.”

After moving to L.A, she created a short film that played the NBC Diversity Film Festival and they encouraged her to apply to their TV writing program. She didn’t know anything about TV writing and confesses she didn’t even know there was a room. However, after being accepted in the diversity program, she learned about TV writing and wrote both a spec script and an original.

From there, she procured her first job on the TV show Whitney and the rest is history.

It’s no wonder Wolfe has found success in the sitcom world. She fondly recalls bonding with her family in front of the TV watching sitcoms.

“My dad would work really hard 12-hour days and he would come home exhausted. We would all sit as a family and watch sitcoms. Married…with Children was our favorite and watching my dad laugh and enjoy this and my mom cracking up at Al Bundy’s antics, that memory has so much joy.”

As the showrunner of Lopez vs. Lopez she can give others the same opportunities to bond over a multi-cam sitcom with jokes designed to make the whole family laugh together.

Steven Hartman is an award-winning, optioned screenwriter. He was a Top 5 Finalist in Big Break’s Historical Category in 2019 and won Best Action/Adventure in Script Summit’s Screenplay Competition in 2021. He holds a Bachelor of Arts degree from Columbia College and had internships at Jerry Bruckheimer Films and Village Roadshow Pictures. Steve is a full-time writer and creative video producer by day and a screenwriter and novelist by night.